A list of Spanish-speaking countries and their capital cities

* Puerto Rico is officially an unincorporated territory of United States.

** Bolivia has two capital cities: Sucre (Constitutional & Judicial Capital) and La Paz (Administrative Capital and the seat of government). Sucre has been the capital of Bolivia since becoming independent from the Spaniards in 1825, and it has been confirmed as such in the New Political Constitution of the Plurinational State of Bolivia, billed in 2009 after a national referendum.

*** PLEASE NOTE: Colombia is written with TWO Os and NOT as "Columbia".

Largest and smallest Spanish-speaking countries in the world

The largest Spanish-speaking country in the world, referring to population size, is Mexico with over 118 million people (2013). The smallest country is Equatorial Guinea with around 740,000 (2013).

Spanish as a Former Official Language

Spanish was an official language of the Philippines until 1987 when it was re-designated as a voluntary and optional auxiliary langauge. However in 2009 the Philippine government started a plan to reintroduce the Spanish language into its school system. 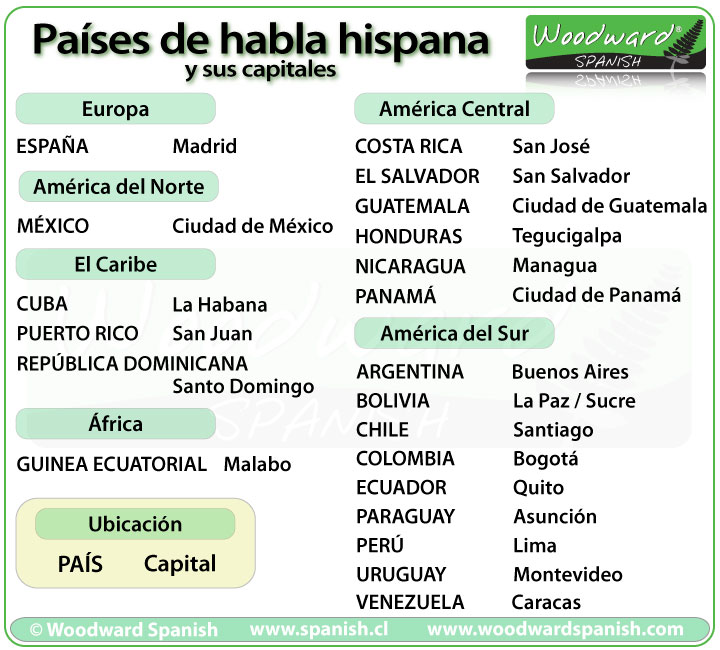 Try our interactive Game about Spanish-speaking countries and their capital cities using the sentence "The capital of COUNTRY X is ..." with 4 alternatives to choose from.

See our List of Countries and Nationalities in Spanish.


If you found this guide Spanish-speaking countries useful, let others know about it: